After reducing the fines for violation of traffic rules, the Gujarat government has decided to implement the new Motor Vehicle (MV) Act 2019 from October 15.

The government said the new rules for Pollution Under Control (PUC) certificates and helmets would be enforced from October 15 in order to give adequate time to the public.

State Transport Minister R. C. Faldu told mediapersons that the government would open 900 new PUC centres to help people. “We have received representations from public regarding some issues before the new rules are enforced. We have decided to give some time before the stringent rules are implemented,” he said.

As per the government’s notification, driving without wearing helmet and seatbelt will attract 500 as compared to 1,000 proposed by the Union government.

Three passengers riding a two-wheeler will have to shell out 100, as opposed to 1,000. Similarly, the State will impose lesser fines on penalties such as driving without licence and insurance documents, riding a polluting vehicle, driving under the influence of alcohol, not giving way to emergency vehicles, among others. 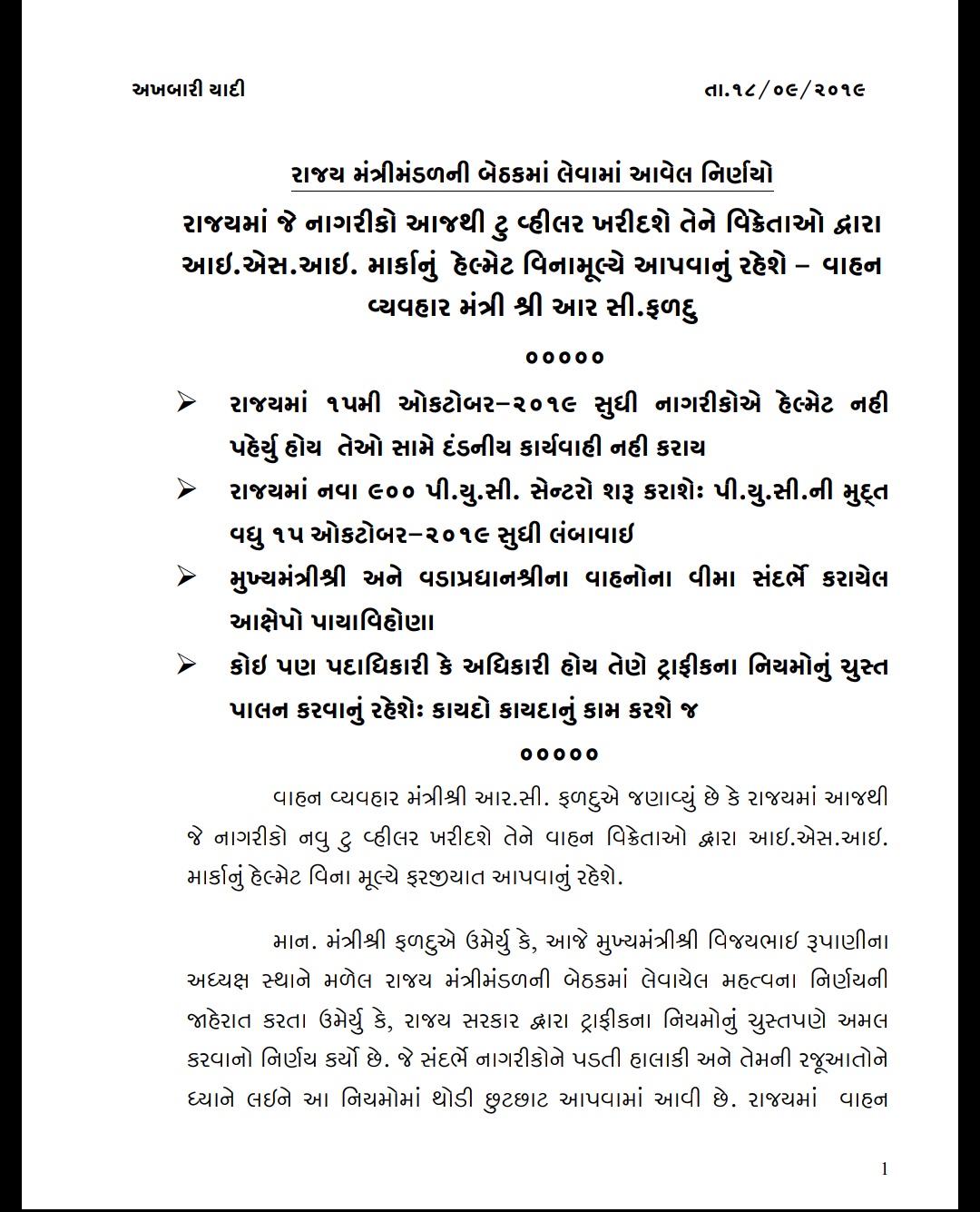 In a partial relief to people, the Gujarat government on Wednesday said the new penalties for traffic offences related to helmet and pollution-under-control (PUC) certificates would come into force from October 15.
Earlier, the reduced penalties for traffic offences in Gujarat came into force on Monday, after the state BJP government announced dilution of the recently-amended Motor Vehicles (MV) Act that has a provision of hefty fines.
While under the amended MV Act, the fine for driving a two-wheeler without helmet is Rs 1,000, the proposed fine in Gujarat is Rs 500, up from Rs 100 collected at present.
For not carrying a PUC certificate, the fine proposed by the state is Rs 500, the same as under the new MV Act.

The state government would issue permits to open 900 new PUC centres across the state in 10 days to reduce the burden on the existing centres, the minister said.
"In another important decision taken in the Cabinet meeting, my department will issue a circular making it compulsory for all the two-wheeler dealers to give a helmet at no extra cost to all those who buy vehicles," he said.

The dealers must give a helmet, having the ISI mark, free of cost to the customers, he said.
Faldu refuted the social media reports claiming that the insurance of one of the official vehicles Chief Minister Vijay Rupani expired in 2015 and yet there was no action on the CM for being a 'VIP'.
Termed such reports as a "mischief", he said the vehicle's insurance is valid till December-end.