Cyclone Vayu would hit the coast near Veraval as a very severe cyclonic storm "with a wind speed of 145 to 155 kmph gusting to 170 kmph around morning of June 13," a release issued by the meteorological department said. The landfall is expected to be between 8 am and 12 noon.

As severe cyclonic storm Vayu inches closer towards the Gujarat coast, the Home Ministry on Tuesday reviewed preparations while authorities have deployed NDRF personnel, rescue officials and teams of the Indian Army have been put on standby.

People living in low-lying areas of these 10 districts are being shifted to safer places. Over 60 people have been evacuated from Diu and Gujarat by NDRF teams with the help of police and civil administration. Those evacuated have been shifted to shelters 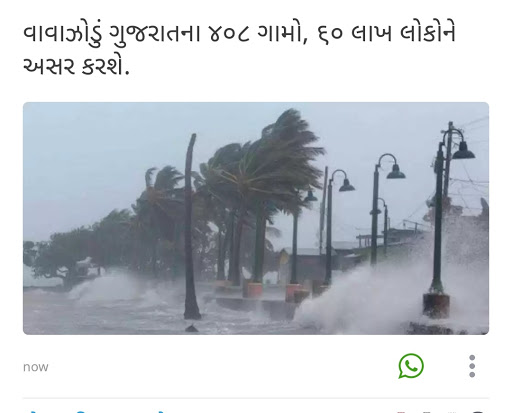 Cyclone Vayu is likely to move further northwards and cross Gujarat coast between Porbandar and Mahuva around Veraval and Diu region and intensify into a very severe cyclonic storm with wind speed 140-150 kmph to 165 kmph.

The cyclonic storm is expected to hit the Gujarat coast on June 13 (Thursday).

Bracing for the impact of the high-speed wind, Gujarat and Diu authorities have already planned to evacuate about three lakh people from identified vulnerable areas. The evacuation will start on Wednesday morning. People will be shifted to around 700 cyclone and relief shelters

The Mumbai IMD said that cyclone is at a distance of 250 to 300km from Mumbai coast but its speed will be the highest on Wednesday morning and therefore, Mumbai, Konkan, Thane and Palghar will receive heavy rainfall. The speed of Cyclone Vayu in the morning was recorded at 135kmph and gusting speed at 150kmph. It is likely to intensify into an extremely severe storm.

KS Hosilkar deputy director general of IMD Mumbai said the cyclone will reach Mumbai by late evening and it won't have a severe effect but bring rainfall and windy effect.

Meanwhile, Mumbai Police, Coast Guard and Indian Navy are on alert in Mumbai. All fishermen have been called back from the sea. Announcements are being made at coastal areas advising people to not venture into the sea.