very severe cyclonic storm Vayu is set to make landfall with wind speed 155-165 kmph on Thursday in coastal areas of Gujarat and Daman & Diu. The latest update on Cyclone Vayu says that the storm is about 280 km south of Gujarat's Veraval coast. The winds speed are likely to go up to 170 kmph.

People living in low-lying areas of these 10 districts are being shifted to safer places. Over 60 people have been evacuated from Diu and Gujarat by NDRF teams with the help of police and civil administration. Those evacuated have been shifted to shelters. 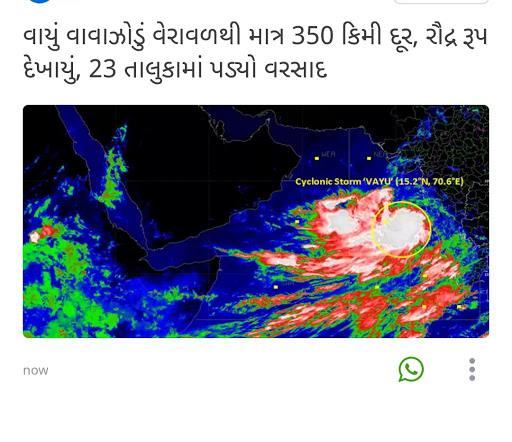 Apart from those in the direct line of impact, strong winds are likely to bring life to standstill in other parts of the state as well. It is important to observe some do's and don'ts to stay safe during and after the cyclonic storm

Bracing for the impact of the high-speed wind, Gujarat and Diu authorities have already planned to evacuate about three lakh people from identified vulnerable areas. The evacuation will start on Wednesday morning. People will be shifted to around 700 cyclone and relief shelters.

The National Disaster Response Force (NDRF) has pre-positioned 39 NDRF teams, comprising about 45 rescuers each, in Gujarat and Diu and they are equipped with boats, tree-cutters and telecom equipment. As many as 34 teams of Army are also on standby.

Union Home Minister Amit Shah has reviewed the preparedness in the region while his ministry has issued detailed advisories to Gujarat and Union Territory Diu, asking authorities to take all precautionary measures so as to ensure that no human life is lost, damage to vital infrastructure is minimised and there is early recovery of all essential services post-cyclone landfall

A warmer Arabian Sea continues to fuel the intensity of Cyclone Vayu as it races towards the Gujarat coast with ‘very severe’ intensity, while pulling moisture from the southwest monsoon, which has made its onset over Kerala on June 8.

The India Meteorological Department (IMD), which has been tracking the movement of the cyclone since its formation on Monday night, has warned that it could bring winds with speed of 145-155 kmph, gusting up to 170 kmph, to the coastal areas in south Gujarat and Maharashtra.

At 8:30 am on Tuesday the cyclone lay centred over east-central Arabian Sea about 290 km west-southwest of Mumbai (Maharashtra) and 320 km south of Veraval (Gujarat