cyclone Vayu, a cyclonic storm, is fast moving towards the north and is expected to hit the Gujarat coast between Porbandar and Mahuva with wind speed up to 120 kmph on June 13.

Cyclone Vayu is expected to have an impact on the Gujarat coast after two days on Thursday. The deep depression is located off the Lakshadweep coast near Aminidivi and is expected to intensify within the next 24 hours. 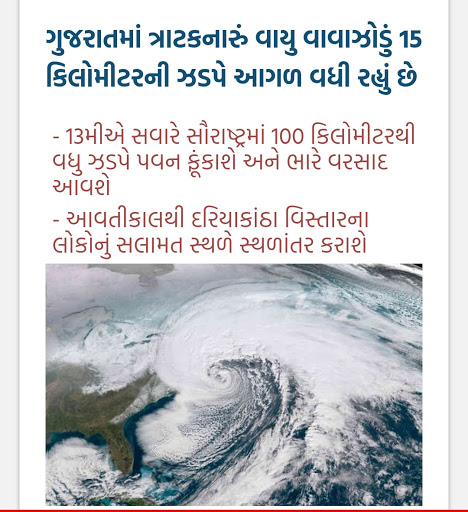 The Gujarat administration is on high alert to deal with cyclone 'Vayu', which is likely to hit the state coast near Veraval on Thursday, officials said.

We have cancelled leaves of all the employees concerned and asked them to join the duty. After the Cabinet meet tomorrow, all the ministers will go to various districts to oversee relief and rescue operations," he said.
"June 13 and 14 are crucial for us. We have roped-in the Army, NDRF, Coast Guard and other agencies for rescue and relief work. To minimise human casualty, we will start shifting people living in coastal areas to safer locations from tomorrow," he said.

The India Meteorological Department (IMD) has warned that the deep depression in the Arabian Sea is developing into a severe cyclonic storm, named cyclone Vayu, and will cause heavy rainfall in the coastal areas of Saurashtra region in the coming days.

The government has decided to deploy National Disaster Response Force (NDRF) personnel in coastal areas of Saurashtra and Kutch from Tuesday morning, owing to likely storm and heavy rain.

The government will also put the Army, the Navy and the Coast Guard on alert.

According to the IMD, heavy rain is likely on Thursday and Friday in the coastal areas of Saurashtra and Kutch, with winds blowing at a speed of over 110 kmph.

The government has advised fishermen against venturing into the sea in the next few days, while ports have been directed to flag a danger signal.

“A heavy rain warning has been issued for Saurashtra and Kutch on June 13 and 14 due to the depression in the Arabian Sea, which will turn into a severe cyclonic storm,” State Meteorological Department Director Jayanta Sarkar told reporters here.

Gujarat ports and transport department's principal secretary Sunaina Tomar said a disaster management plan has been put in place at all ports of the state.
"We have installed power generators at all the ports. Cargo and Ro-Ro ferry operations have been halted. Leaves of port and transport employees have been cancelled," said Tomar

Chief minister Vijay Rupani on Tuesday said people living in the coastal belt would be shifted to safer places.

Anticipating the impact of Cyclone Vayu, schools and colleges have declared a holiday on June 13, the day the cyclone will hit Gujarat.

The India Meteorological Department (IMD) has issued a warning of heavy rains and high winds at a speed of over 110 kilometres on June 13 and 14 in coastal areas of Saurashtra and Kutch. Orange alerted cyclonic storm is expected to bring widespread rain all along India’s western coast, as per IMD.

The Met department has predicted that Cyclone Vayu will move over the east-central area and adjoining areas of the Arabian Sea on Tuesday evening with a wind speed of 90-100 kmph. Cyclone Vayu is likely to have a mild impact over the Lakshadweep area, Kerala, Karnataka and south Maharashtra coasts.