An informal group of fixed-wage employees of Gujarat — Team Fix Pay, which is coordinating the legal fight in the Supreme Court against the Gujarat government’s controversial policy of employing people on fixed wage for five years before regularising them — has decided to protest on February 16 when the policy will enter into 14th year.

The group has decided that all the state government employees who have been recruited under the fixed-wage policy will, first, give a memorandum to the concerned head of the department with a demand to end the policy immediately and second, work wearing black ribbon as a mark of protest on February

The Gujarat government will be recruiting 50,000 employees for class III posts on fixed pay in the coming months. The govt. has asked all state departments to “immediately start recruiting”.

With the elections nearby in the state, the state govt. is speeding up the process of filling up the vacant posts of class III employees. Departments have been asked to fill vacant posts without delay, “disregarding the powers for recruitment currently vested in Gujarat Public Service Commission, Gujarat Secondary Service Selection Board and Gujarat Panchayat Service Selection Board.” 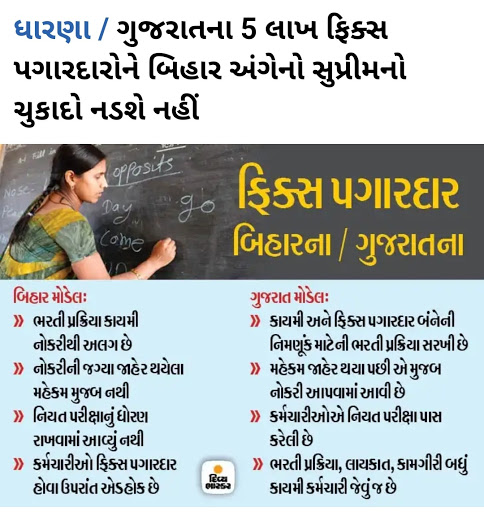 Ahmedabad: In a major verdict, the Gujarat
High Court on Friday told the state government to discard its
`fixed pay job employment scheme` stating that it was
exploitative in nature.

The verdict could impact about 1.5 lakh employees who
have been recruited under the scheme in different government
departments.

A division bench of acting Chief Justice Bhaskar
Bhattacharya and Justice JB Pardiwala also told the state
government to give regular salary benefits to all its fixed
pay employees from the date of their appointment.

The Gujarat government has been employing people in
various fields like police, education, forest department on a
fixed pay basis, where they are given some basic fix pay for
the first five years.

Such employees work on contract for the first five years
and become permanent employee subsequently.
The court told the government to discard the fixed pay
employment scheme saying that it amounted to exploitation of
new employees and against fair practice.

Petitioner Rajendra Shukla in his petition had contended
that the fixed pay scheme was inhuman and new employees were
being exploited by the state government.