Brace for a mercilessly hot weekend as weatherman has issued a red alert over heatwave conditions in Ahmedabad, Gandhinagar, Vadodara, Rajkot, Amreli, Kutch and other places from Friday to Sundaty.

The India Meteorological Department (IMD) - Gujarat has warned that from Friday to Sunday temperatures are likely to touch 45C.
Even as Ahmedabad recorded 41.9C on Wednesday, the Ahmedabad Municipal Corporation (AMC) has issued an orange alert for Thursday with maximum temperature is likely to remain around 44C.

The sudden spurt in heat on Tuesday is not a one-off affair and the weather will continue to be searing over the next few days, the IMD said. The temperature is likely to cross 45 degree Celsius as a red alert has been issued for the city and other regions in the state for three days from April 26 by the IMD. An orange alert (slightly lower temp) was also issued for Ahmedabad for Wednesday and Thursday. 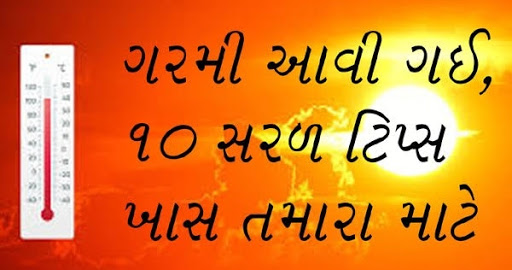 Jayanta Sarkar, IMD regional director, said, “There is an orange alert in the city on Wednesday and Thursday where the temperature will remain around 43-44 degree Celsius. However, a red alert has been given for the city for next three days from Friday onwards.”

Sarkar added, “Heat wave alert has been issued for many parts of the state that include Gandhinagar, Banaskantha, Sabarkantha in North Gujarat and in Saurashtra region in Rajkot, Amreli, Surendranagar and Kutch.”

The AMC has released its action plan to tackle the heat wave. Officials will ensure distribution of ORS at urban health centres, anganwadis and on BRTS buses, water sprinkling in AMC gardens, AMTS depots and construction sites. Ice packs will be made available at all civic hospitals.

Resident Jahnvi Desai, a digital marketer, said, “Rains that we had two weeks earlier had brought immense respite. However, since last week the temperature has been soaring. Going out in the afternoon will be really difficult.

How to keep cool

Consume a lot of water, buttermilk and other liquids

Do not remain exposed to direct sun for a long time

Stand in shade as much as possible

The India Meteorological Department (IMD) has issued a red alert, citing heat wave warning for three days from April 26 to 28 across Gujarat, except the southern districts.