Novak Djokovic says he is motivated by "having a shot" at Swiss great Roger Federer's all-time men's record of 20 Grand Slam victories.

It was his third Slam in a row, having won Wimbledon and the US Open in 2018

Next stop for Novak Djokovic is extraordinary but familiar: he will head to the French Open with the opportunity to hold all four Grand Slam titles at once.

'Nole' achieved that feat in 2016, having won Wimbledon and the US Open in 2015 before winning a sixth Australian title and his first at Roland Garros. It was dubbed the 'Nole Slam' and he became just the third man to hold all four majors at once; though it was not a true Grand Slam, won within a calendar year as American Don Budge (1938) and Aussie Rod Laver (1962, 1969) did in the past.

Djokovic would also become just the third man, after Australians Laver and Roy Emerson, to win ever major at least twice if he can win at Roland Garros. Yet his seventh Australian Open win was so outrageous in its dominance - a straight-sets annihilation of great rival Rafael Nadal - that attention quickly turned to even more incredible ponderings

I'm aware that making history in the sport I truly love is something special," he said.

Top seed Djokovic's record seventh men's singles victory in Melbourne moved him outright third ahead of American Pete Sampras in the all-time list, closing in on Federer and Nadal (17).

"Of course it motivates me," he said.

"Playing Grand Slams, the biggest ATP events, is my utmost priority in this season and in seasons to come. 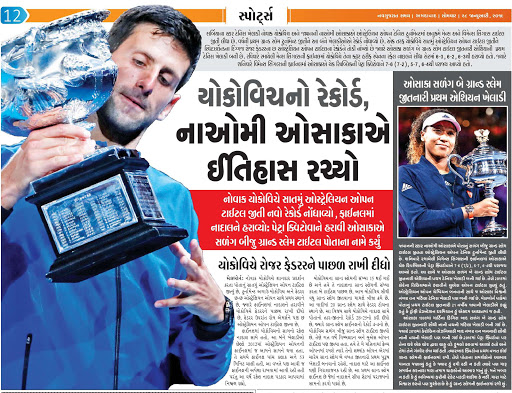 "How many seasons are to come? I don't know. I'm not trying to think too much in advance.

"I do want to definitely focus myself on continuing to improve my game and maintaining the overall wellbeing that I have - mental, physical, emotional - so I would be able to compete at such a high level for the years to come."

Those same commentators must feel as foolish and helpless as Nadal and Lucas Pouille were when Djokovic’s absurd, flawless tennis reduced them to broken wrecks holding a racquet.

He simply does things that frustrate, infuriate and ultimately break his opposition — whether they are lowly-ranked or the likes of Roger Federer and Nadal.

When Djokovic is like this — that relentless machine that powered to a 6-3 6-2 6-3 thrashing of fellow all-time legend Nadal in Sunday night’s Australian Open final at Melbourne Park — he is untouchable.

At his best, he is the greatest. A player capable of making his two greatest rivals quiver — reducing them to whipped students out of their depth.