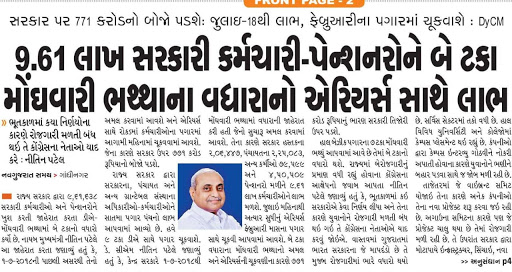 Gujarat government has announced an increase in Dearness allowance of more than 9.61 lakh employees and pensioners by 2 per cent. The hike in dearness allowance will be given with retrospective effect of 1st  July  2018. This was announced by Deputy Chief Minister Nitin Patel at Gandhinagar this evening. Mr Patel informed that the increased salary would be paid from February along with the arrears since July last year.

This decision would put an additional annual burden of Rs. 771 crores on the state exchequer. AIR Ahmedabad correspondent reports that apart from state government employees and pensioners, employees of Panchayati Institutions will also get the benefit of this hike.

The Gujarat government has given a festival gift of sorts to over 8.20 lakh employees and pensioners of the state by taking a decision to increase their dearness allowance by 2% with retrospective effect of January 1, 2018.

He said that the decision has put an additional burden of Rs 680 crores per annum on the state exchequer. ‘Around 4 lakh employees of state and Panchayat department and 4.25 lakh pensioners will benefit from it,’ he said. In the wake of the festive season the arrears part of the DA since January would be paid in cash in September to them.